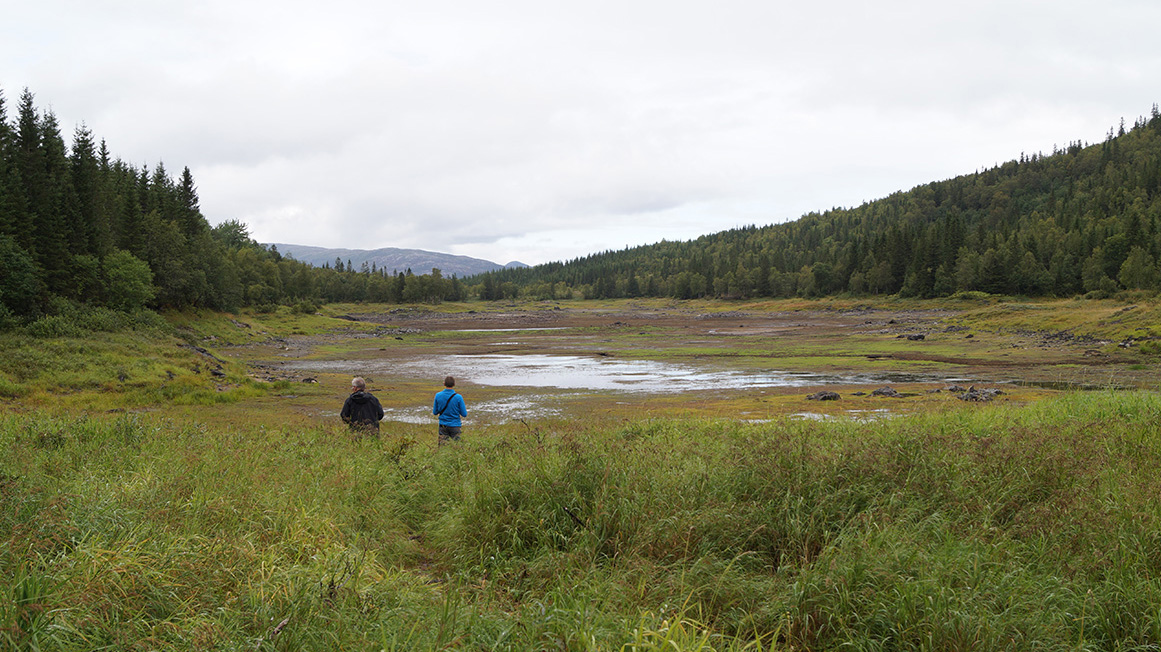 Engavatnet is a Turlough lake in a kastic terrain. At irregular intervals, the lake drains through its bed in a spectacular way, leaving a muddy plain with dead fish and open dolines into which the water disappeared. After some time, generally after rain, the lake may start filling up again, returning to its "normal state", when the fish also returns.

The lake is situated on karstified marbles and thus is undermined with a (unknown) cave system. During periods of severe drought (no rain), the surrounding water-table will drop, creating a pressure on the muddy lake bed, which in turn may burst and let water drain into the underlying karst. The water probably emerges in springs around Aunhola (see geosite B10). At the end of the emptying process, the drainpipe clogs up with mud, and after rain, a raised watertable permits the lake to re-fill.

Engavatnet is a “Turlough”, a karst phenomenon well-known from western Ireland, but almost unknown in Scandinavia. The site has easy access, and the process is very spectacular when it occurs.

The site is ideal for demonstrating processes and rapid changes in karst systems and their underground drainage. Also, the sensitivity of water-table balance with respect to precipitation is well explained, as well as the probable syphon-effects that operate during the emptying process. Due to the unpredictability and rate occations of the process, the site must be well prepared and illustrated with time-lapse photos, as well as showing past- and real-time data curves of precipitation and lake level.

Tourists visit this site mainly during the years the water disappears. Otherwise, the majority of the visitors come as part of a guided tour. A simple footpath along the lake shore to a platform and display installation that should be erected at the northern end, where the emptying process is most spectacular and where lake level loggers could be installed.