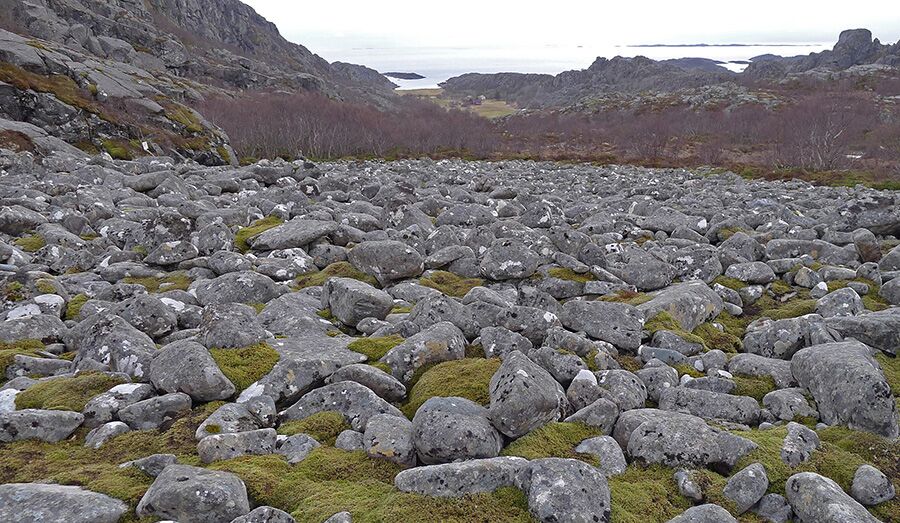 When the ice melted after the last ice age, the sea level was situtated about 100 m above the present day sea level. The land slowly lifted due to isostatic rebound, and the traces of the the Younger Dryas Main Shoreline in the Vega area can be found between 90 and 96 m a.s.l., mostly eroded in the bedrock. In the scar between the Hestvikfjellet and Tårnet mountains in the southern part of Vega, the raised shoreline can be seen as three separate fields with well-rounded stones, present between 92 and 96 m a.s.l. The trail up to viewpoint Kjulsveten (geosite V1) passes through fields of well-rounded beach sediments. At 99 m asl the marine limit is found as a beach ridge with angular boulders. The sediments were probably heaved up by storm waves shortly after deglaciation.

Tourists and locals taking the hike up to Kjulsveten walk by the site today. In addition, we believe this site has a good educational potential. Standing on the raised shoreline, there is a good view towards the beach and the present sea level. This makes the site exceptionally good for educational purposes, for example explaining the effects of isostacy and sea level changes in the area.